What’s in YOUR Mouth?

“The entrance of your words gives light. It gives understanding to the simple.” (Psalm 119:130)

Some mysteries are only discovered when you turn over the rock, dig a little deeper, look where others are passing by. Such was the case with Psalm 119:130

When I looked at the Hebrew word for “entrance”, (פֵּתַח pêthach), it turns out that is the only time in the entire Bible, that Hebrew word is used. It literally means to make a declaration, statement or disclosure in a lucid and perfectly clear utterance.

There’s something about speaking, declaring and stating whatever God says, that brings light, and by implication, life to any situation. It was John who said, “In HIM was LIFE and the LIFE was the LIGHT of men.”

I read the Scriptures quite often, but recently decided to read them out loud. After all, it was Paul who said that, “faith COMES BY HEARING”.

Think about it for a moment… You can have a thought, either positive or negative about someone. But that thought is like a seed buried in your mind or heart. It’s not until it’s spoken that it has life or death. As Solomon wrote in Proverbs 18:21… “Death and life are in the power of the tongue…”

When David said, “the “pethach” of your word gives light”, he was referring to the speaking of whatever God has said, that gives light, and by implication, life. That changes my perception of this passage from one of passively letting God’s word gain entrance to my heart, to one of purposefully taking His word in my mouth and speaking it out loud, whether to myself or to others.

When you speak out loud the wisdom, counsel and Word of God, it brings light for your path.

The light that comes from reading or declaring is contingent upon the subject matter. In Psalm 119:130, David chose a Hebrew word to identify specifically what we should be declaring, which includes all of God’s words, matters, counsel and business.

The “light” that it brings has the effect according to its ancient usage, of something similar to the breaking of day when the sun rises and dispels all darkness. What a welcome relief daybreak can be!

The word translated as “understanding” in that verse, means the ability to discern and distinguish. It’s easy to discern between hot and cold, dark and light, but it can be difficult to discern the thoughts and intents of the heart. But God’s Word can. (Hebrews 4:12) And we often need that discernment when functioning in the business arena.

Why? Well, if you happen to be unskilled in this area, and are easily persuaded and enticed with flattering words, you are the Biblical definition of “simple”. That’s not an insult. We were all born simple. Some of us stayed that way longer than others. And the simple get taken in business dealings every day of the week.

There’s much more that could be said about this passage, but I wanted to leave it with you to consider, for your own edification. And as I sometimes do, I wrote my own “fully amplified” version (MQP – AMP). Here it is for your edification.

Have a blessed day! 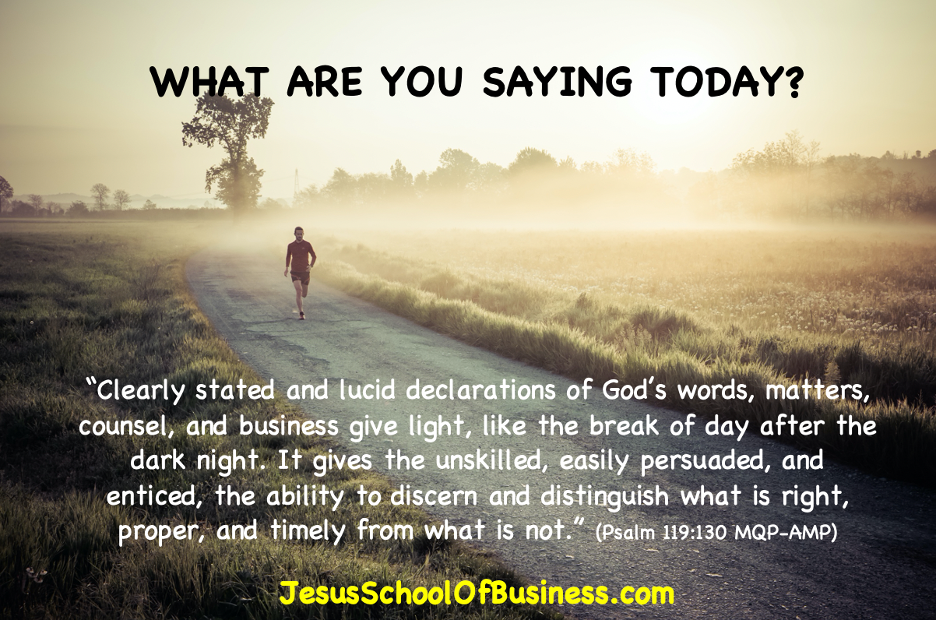 P.S. In the soon coming days, I’m going to share four very personal, faith-building stories with you. I trust they will serve to build your faith and encourage your walk with Jesus.